Geekbench 2 for the iPhone

A couple of the folks who hang out on the Geekbench channel on Moofspeak have been bugging me to port Geekbench to the iPhone. While there are a number of limitations with the current iPhone toolchain (the most notable being the lack of STL support), I whipped up a quick port that brings some Geekbench 2 benchmarks to the iPhone: 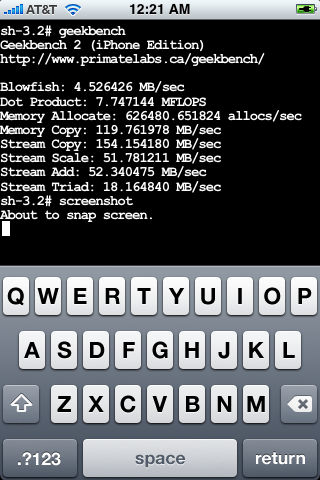 If you've got an iPhone (and you're crazy enough to run third-party applications on it) you can download Geekbench 2 for the iPhone and try it yourself.

I'd like to thank the iPhone developers on MoofSpeak who helped me get the iPhone Toolchain up and working and who graciously donated their time and energy to testing Geekbench 2 for the iPhone (since I live in Canada, I don't have access to an iPhone).

Anyway, what's the point of porting Geekbench to the iPhone without reporting the results!

I'm reporting both the baseline score and the raw score for each benchmark (where a score of 1000 is the score a Power Mac G5 1.6GHz would receive). Higher is better.

It's hard to draw any firm conclusions given the limited number of benchmarks present in the current build of Geekbench 2 for the iPhone, but it looks like the ARM CPU performs reasonably well (around 10% the performance of a Power Mac G5 1.6GHz at the best of times), especially considering it's a processor for a cell phone. After all, no one's going to be running Photoshop on an iPhone!