Work on Geekbench 2.2 has been going well, and while there are still some features that need work, I've decided to ship a beta version so people can start trying out the new features.

What's new? Geekbench 2.2 for Mac OS X now sports a unified interface (it's now one application instead of three). You can now run 32-bit, 64-bit, and Rosetta benchmarks from the same program:

I've also tweaked parts of the interface, such as updating the benchmark progress interface to provide more information about the current workload: 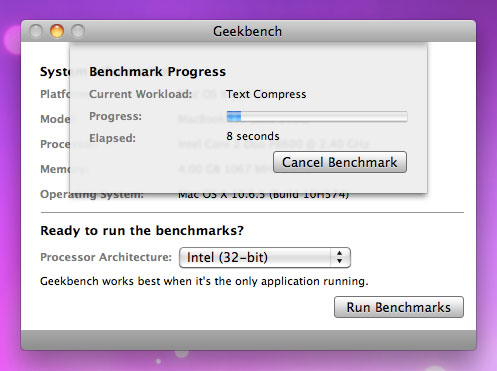 The biggest new feature, though, is the new built-in stress test: 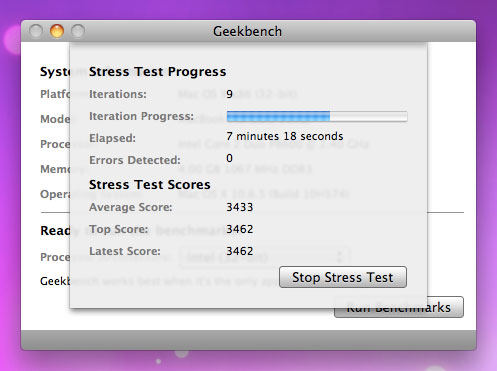 The stress test runs Geekbench's multi-threaded processor workloads in a loop. This exercises your computer's processor, memory, and motherboard to try and uncover any hardware issues your computer might have.

Major hardware problems will cause obvious errors, but to help detect more subtle problems Geekbench calculates a stress test score for each loop iteration, and keeps track of the average, the top, and the latest iteration score. For example, if the average score is significantly lower than the top score, or the last score is lower than the average score, chances are your processor is running slower because your computer has a cooling problem.

Give the beta a try. If you've got questions or comments about the beta I'd love to hear them; just send an email to geekbench22beta@primatelabs.ca!